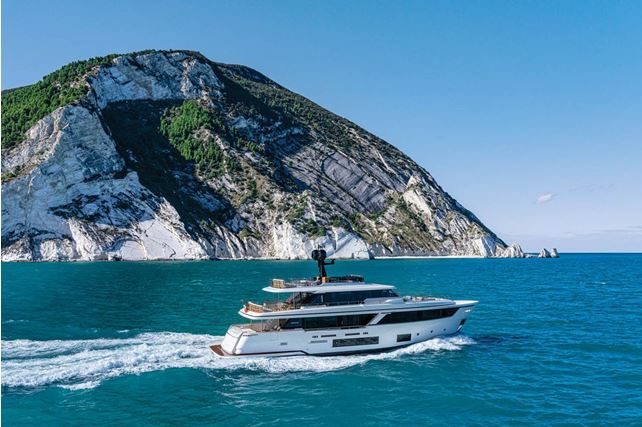 A look at four brand-new models from midsize to mega for the upcoming yachting season.

Yet another option—what Custom Line calls a plug-in hybrid propulsion system—can minimize emissions of carbon dioxide and nitrogen oxide. The builder is estimating range with the standard engines at 2,000 nautical miles, given a cruising speed of 10 knots.

With the 1,150 or 1,200 hp engine packages, top speed is projected to be 15 knots. Creature comforts include more than 6.5 feet of headroom. Accommodations are for 10 guests in five staterooms, including a main-deck master.

Yes, this Spirit of Tradition stunner is a new build from Lyman-Morse, which developed the design in collaboration with fellow Mainers C.W. Hood Yachts and Stephen Waring Yacht Design. Construction is wood composite, and propulsion is twin Volvo Penta IPS1350s, producing a reported top-end speed of 39 knots. Hardware is custom-made from titanium.

The hull was built in four separate parts to create a more ergonomically efficient environment at the shipyard; there was a bottom module, port and starboard topsides sections, and the curved transom section. Displacement on the finished yacht is 66,000 pounds, with a draft that’s ready for skinny water at 4 feet, 10 inches.

Bering Yachts in Turkey is on track for an August delivery of its new Exploration series flagship, the Bering 92. All equipment was expected to be delivered about the time this issue went to press, with fairing of the hull and furniture installation already underway. The full-displacement hull is steel, and the yacht has an aluminum superstructure. It’s intended to be a long-range cruiser, with Bering estimating a range of more than 3,500 nautical miles at 9 knots.

Maximum speed from the twin 455 hp Cummins QSM11 engines is projected to be 12 knots. On board, accommodations are for 10 guests, and there are quarters for four crew. And the yacht should be Bahamas-ready, with a draft of 5 feet, 7 inches.

MJM Yachts is building the 3z on the existing Doug Zurn-designed hull that was used for the 35z. Twin 300 hp Mercury Verado outboards are expected to achieve an estimated top speed of 43 knots, with a projected range of 250 miles at 33 knots. The yacht has three social zones, starting with a seating-and-dining area at the bow (forward of the opening windshield).

The cockpit can include an optional grill and ice maker, while the pilothouse has slide-open windows as well as air conditioning. According to MJM, the dual-console design combines the fun of an open boat with the seagoing characteristics that boaters need to keep the ride comfortable should the wind and current pick up.